* “These structures can be described as fiber-like or filamentous”
* “The unknown fibers associated with skin lesions can be described as coenocytic (aseptate), smooth-walled, branching, filamentous objects. The fibers have been analyzed by FTIR (Fourier Transform Infrared Spectroscopy) and have tentatively been identified as cellulose.”
* “The fibers are clearly hyphae-like structures, and yet, do not fall within the description of known hyphae or pseudohyphae”

So can the items in the photos be described as “coenocytic” or “hyphae-like”? The two photos are titled “Objects emerging from lesion on child’s lip at 200X”. Now given this “200X”, how long does that make the “objects”? We can’t really say, as the images themselves could be scaled to any size. But approximately, the “fibers” on my screen are 40mm long, and 2mm thick. This makes them 0.2mm long, and 0.01mm thick. (200 microns by 10 microns, where 1 micron=0.001mm). This puts them approximately in the same scale as hyphae (the living, growing parts of fungi, tiny tubes filled with cytoplasm and nuclie).

On an old page at morgellons.org, that is still up, but seemingly not linked to, it says:
“The fibers are clearly hyphae-like structures, and yet, due their immense size (150 microns wide), they do not fall within the description of known hyphae or pseudohyphae. “
Huh? Even if measuring off 1:1 the screen, then at 200x magnification, 150 microns would appear as 30mm wide (about an inch). Plainly the objects are not 150, and are more like 15 microns thick. Either that or the photos are labled incorrectly. However, the SEM photos clearly show “fibers” that are about 15 microns.

Hypha can be both septate and aseptate (Coenocytic). Septate hyphae are divided by cross section segments called septa. Aseptate hyphae are not. Detrmining if a structure is septate or aseptate is difficult with the images provided, as the most of the structures are out of focus. The clearest structure (in the first image) actually shows some evidence of being septate, rather than aseptate. The picture appears to have been taken with reflective light (from above), and a better determination could be made with transmissive light (from below). Additionally, the specimen should be mounted on a slide and stained to enhance contrast. 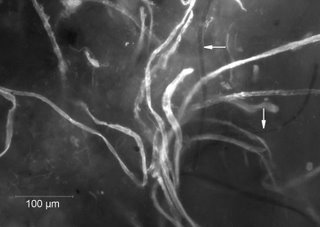 However, this photo does not resemble the first photos at all, clearly they are different structures, much longer, and smoother.

Then we have some SEM (Scanning Electron Microscope) photos. These photos reveal surface features. 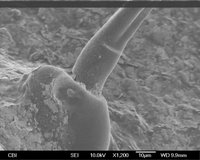 Here we have a scale, showing the object is about 15 microns thick. Human hair is generally described as “60-100 microns in diameter”, which would seem to eliminate that as a candidate. However, that is the diameter of full grown head hair (a “terminal” hair). Finer new grown body hair will emerge with an initial diameter that is much smaller, children are covered in “vellus” hair, which has a diameter of under 30 microns.

Going back to the first photo, since the “structures” here are from a lesion on the lip of a child”, and the lesions clearly extend beyond the actual lip surface, then is it not reasonably to think they might be vellus hairs, coated in some viscous liquid (blood, puss or sebum)?

In this photo of the site from which the specimen was obtained:

1. The fibers are environmental and unrelated to any illness
2. Morgellons is not a distinct disease
3. People who think they have "Morgellons" probably have a mixed variety of physical and/or mental illnesses.